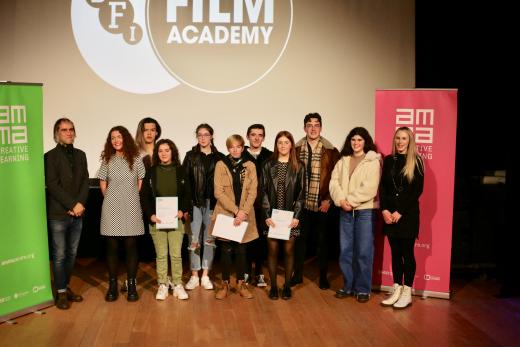 The AmmA Centre has been delivering the BFI Film Academy programme weekly to students 16-18 years old from September until December 2021.

This programme offers young people the chance to learn about career pathways in the film industry. Participants get hands-on experience in filmmaking and participate in masterclasses with industry professionals, learning what it takes to make it in the film world. Masterclasses were conducted by industry professionals such as Actor and Director Jonathan Harden, filmmaker Michael Macbroom and Costume Designer Enda Kenny.

Students also attended the Shorts to Features Conference at Foyle Film Festival, which had various sessions with leading industry professionals.  The students also, throughout the 2 1/2 months, worked towards gaining an NCFE Level 2 Award in “Preparing to Work in the Film Industry”.

The showcase event was attended by students’ family and friends, as well as teachers and Bernard McCloskey, Head of Education NI Screen, all of whom were “extremely impressed”.

The event was a great opportunity for the young people to show off their hard work and skills acquired throughout the programme and network with professionals from the Film Industry.

We also use analytics & advertising services. To opt-out click for more information.